An analysis of images taken during Wednesday’s lift-off in Cape Canaveral, Florida, shows that the shuttle’s underbelly was hit by a piece of ice – rather than foam from its external fuel tank as previously believed, he said. The impact left what appeared to be a 19 square centimetre gouge near the hatch of one of the shuttle’s landing gears. 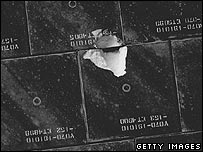