As some of you know I’m involved with the Mount Burnett Observatory, a community run astronomical observatory in the Dandenong Ranges of Victoria near Emerald to the south-east of Melbourne. Originally built by Monash University in the early 1970’s it’s 3 years since a small group of people formed a community association, took over the site and starting resurrecting it as an observatory by and for the people. It’s now three years on and by the end of last year we were the second largest astronomical association in Victoria!

This Saturday (24th January) is our third birthday celebration so we’re having an open day running from 1pm through to 6pm with tours, activities, a solar telescope and components from the Murchison Widefield Array (MWA), one of the precursor telescopes to the massive Square Kilometer Array telescope project!

At 6pm we have a barbecue and then at 7pm there will be a talk by Perry Vlahos on what there will be to see in the sky over the coming month. After that we’ll be socialising and, if the weather behaves itself, viewing the stars through the many observatory telescopes. 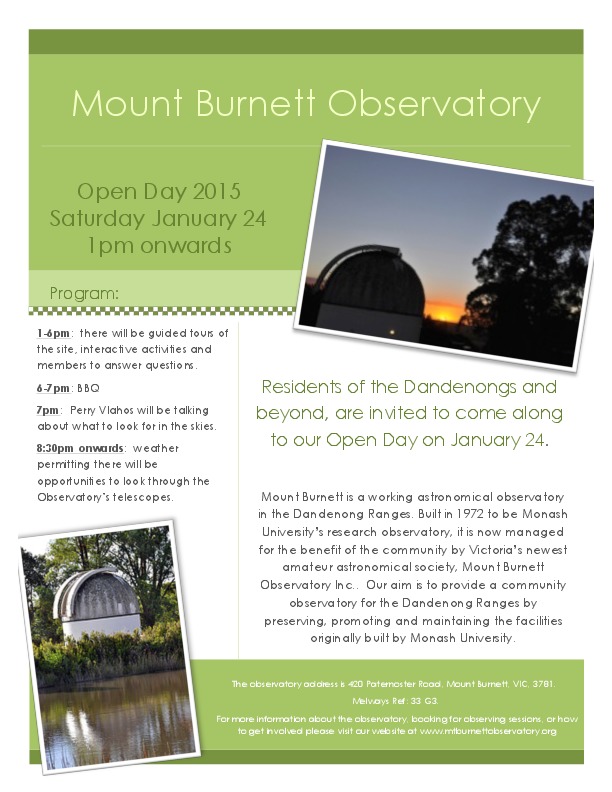 Looks like things are moving along in the world of 64-bit ARM, systems aimed at early adopting developers are now around. For instance APM have their X-C1 Development Kit Plus which has 8 x 2.4GHz ARMv8 cores, 16GB RAM, 500GB HDD, 1x10gigE, 3x1gigE for ~US$2,500 (or a steep discount if you qualify as a developer). Oh, and it ships with Linux by default of course.

Found via a blog post by Steve McIntyre about bringing up Debian Jessie on ARMv8 (it’ll be a release architecture for it) which has the interesting titbit that (before ARM had their Juno developer boxes):

Then Chen Baozi and the folks running the Tianhe-2 supercomputer project in Guangzhou, China contacted us to offer access to some arm64 hardware

So it looks like (I presume) NUDT are paying it some attention & building/acquiring their own ARMv8 systems.