Well there was me thinking we were going to get the wooden spoon after Wales lost their first 4 matches in the Six Nations, but they’ve managed to avoid that by beating the old enemy, England, 27-18! Our fly half (James Hook) managed to score 22 of those 27 points. 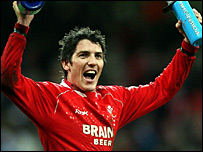 Would have been nicer to have won a few more matches along the way, but at least it’s not a whitewash (especially given that 74,500 people were watching in the ground). 🙂