A Texas judge today faced a widespread rebuke from her fellow lawyers for refusing to keep her courthouse open after 5pm to hear a last-minute death row appeal. The prisoner was executed hours later. […] His lawyers had suffered a computer breakdown and were unable to file the appeal within regular working hours, and had begged Judge Keller for more time. Ms Keller refused.

They wanted an extra 20 minutes..

Marshall Kirk McKusick and the “Unix Heritage Society” have released a 4 CD set that contains, amongst other treasures, a complete set of the various BSD UNIX releases ever done, from 1BSD through to 4.4BSD (both regular and “lite” (sic) versions). 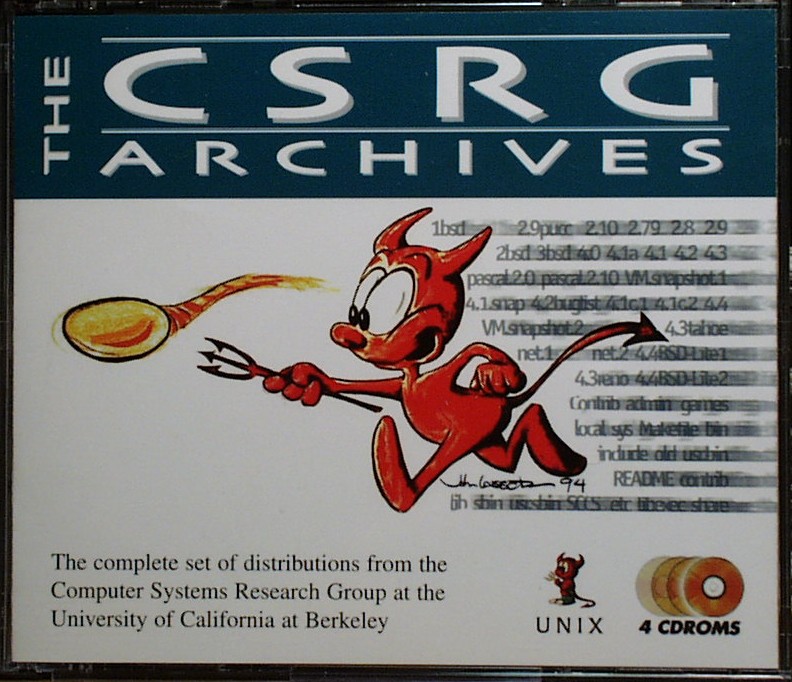 The government of the Republic of South Africa has published (( on the RSA Open Source Software in Government website )) the latest version (4.1) of its Minimum Interoperability Standards (MIOS) for Information Systems in Government, which now includes ODF as their document format:

The main thrust of the framework (in line with international best practice), is the adoption of a structured approach with regard to information systems. To achieve this approach, and to ensure the enhancement of interoperability across Government, a minimum set of standards are included in this document as a required Government-wide standard. To this end, this updated version of MIOS contains an explicit definition of Open Standards as well as the inclusion of the ISO (International Standards Organisation) Open Document Format.

It also says that they will consider open source software favourably for their IT systems:

In developing open information systems, open source based solutions are to be considered before proprietary ones

This is expanded upon in their new Policy on Free and Open Source Software use for South African Government, which codifies it as:

3) All new software developed for or by the South African Government will be based on open standards, adherent to FOSS principles, and licensed using a FOSS license where possible.

5) The South African Government will encourage the use of Open Content and Open Standards within South Africa.

They are also being reassuringly pragmatic about it, rather than dogmatic, as the justification says:

This is not to say that FOSS/OC solutions are currently available or appropriate in every situation or for every user, a reality accommodated in the revised policy.

So, all in all, quite a positive outcome!

I don’t know whether to laugh or cry over this one..

A company sues Cisco for infringing a patent. Just one problem, they filed the suit the day before the patent was granted!

It then appears they realise their faux pas and so persuade someone at the court to alter the docket to the day after, so it will match the patent issuance date!

With much thanks to the excellent Patent Troll Tracker blog for the news and to Dennis Crouch’s Patently-O blog for the complaint.

Props to Dennis Kaarsemaker for creating RSS feeds for changes to Ubuntu releases, such as the ones for Gutsy and the forthcoming Hardy Heron 07.10 LTS release!

In 2004 the ever wonderful Clarke and Dawes did a very special (and still topical) MasterMind on John Howard and his governments history ((Those outside Australia may need to look up what a “non-core promise” is.)) and why they got re-elected.

Now they’re back for the 2007 election, with a quick quiz on “The achievements of the Howard Government” (links to a transcript and video streams of the broadcast) which is well worth watching!

After the previous reports of Microsoft stacking standards bodies, Andy Updegrove points out that there is now a far more insidious problem facing the ISO/IEC Standards Committee 34 as a result of its suddenly inflated membership.

The rules of the committee require at least 50% of the ‘P’ status members (not the observing members) return a vote in response to every ballot request (even an ‘abstain’ vote counts).

At the end of 2006 the committee had 23 members, having gained 5 over the previous 2 years.

By the time of the OOXML vote in September the number had more than doubled – and 22 new countries joined between April and the end of August, plus there were 11 new ‘P’ members.

The problem now is that none of the new ‘P’ members are bothering to vote – the last 3 ballots have failed because that 50% figure has not been hit. As Andy writes:

While I’m told that 90% of committee votes have achieved the necessary 50% return in the past, the current numbers tell a far different story: the three most recent (SC 34 N 870, SC 34 872 and SC 34 N 874) have all failed because of P member apathy. As I read the tallies at those links, only one recent P member responded to a single ballot, even after some ballots had been reissued for a second or even a third time. Had it not been necessary to include the new P members in the calculations, the second two votes would have passed (the first related to establishing a liaison relationship with another organization, and not a standard).

They haven’t even bothered to return an ‘abstain’ vote. This pretty much confirms that the only reason they could have joined the committee for was to vote “Yes (without comments)” on Microsofts OOXML proposal. 🙁

Andy then goes on to quote from the weekly memos of Secretariat Manager, Ken Holman, as in increasing desperation he tries to coax the new members into meeting their obligations and voting on ballots that are dieing from lack of interest. Here is the penultimate quote in the series to give you a flavour..

You will see at that link that (as of Sunday evening) only 7 member bodies of our 38 participating members have actually submitted a ballot responseâ€¦.Since the recent influx of new P-members to SC 34, not a single ballot has been able to be processedâ€¦

It is critically important that P-members remember their obligations: if we do not get 20 responses per ballot, the work of SC 34 will grind to a haltâ€¦.If you do not plan to participate in the work of SC 34, please consider changing your membership to Observer status. For those national bodies that joined in the interests of DIS 29500 Ecma 376 OOXML, remember that P-member/O-member status in SC 34 has no effect on attendance and voting at the Ballot Resolution Meeting being held in February. If this is your only interest, it would serve SC 34 well to change your membership status to O-member.

One wonders if they will suddenly spring back into life when Microsofts XPS standard arrives there.

The USGS is reporting a magnitude 6.8 earthquake off of the coast of the South Island of New Zealand, near the inlet to Milford Sound and 64 miles from Queenstown (which is a way inland).

You can get an idea of where it was from this Google Map link and it looks like the coastal area is all national park, with no settlements marked.

Now, Mr Balmer, precisely what “patented intellectual property” are you talking about here ? Please be specific, patent numbers would be very handy..

Or are you just trying on a shakedown with vague threats to see what easy protection money may come your way now that Vista and Office 2007 aren’t selling so well ?

Thanks Novell, for nothing..

Some hot news in from New Scientist..

Clifford Woolf and his colleagues at Harvard Medical School have now discovered a way of blocking just the pain neurons using capsaicin – the active ingredient in chilli peppers – along with a version of lignocaine that can’t diffuse through cell membranes unassisted. [….] Woolf’s team is testing other chemicals that can activate the TRPV1 receptor, since people may not like the initial pain of a dose of chilli pepper. Tests on volunteers are expected within two years.

I can think of a couple of people who might want to volunteer for testing.. 🙂