Thanks to Jeremy for pointing out to me a photo feature on the LHC at CERN. Some really brilliant pictures of truly Big Science getting built. 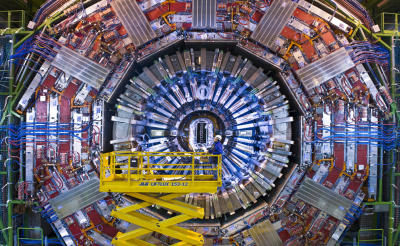 Of course, if you’re worried about this causing the world to end it’s probably worth reading the info they put out in 2003, which simply points out that the Earth will have seen this (and much more) before:

The Large Hadron Collider (LHC) can achieve an energy that no other particle accelerators have reached before, but Nature routinely produces higher energies in cosmic-ray collisions. […] Whatever the LHC will do, Nature has already done many times over during the lifetime of the Earth and other astronomical bodies.

To put things into proportion:

Speculations about microscopic black holes at the LHC refer to particles produced in the collisions of pairs of protons, each of which has an energy comparable to that of a mosquito in flight.

So you can put your brown paper bags away now.. 🙂