KDE have announced the availability of the first release candidate of KDE 3.4, and OSDIR have an excellent set of screenshots up already, courtesy of Stephen Binners KLAX KDE 3.4RC1 Live CD.

When I was young, my parents used to take myself and my brother out to Cefn Onn Park to the north of Cardiff. Back then it was a drive over the old bailey bridge over the River Taff between Llandaff and Llandaff North, through Whitchurch, past the tax offices and the (now gone) Monico cinema and out into the countryside.

But one of the most mysterious parts was the railway halt right in the middle of the park. I remember seeing trains stop there and people getting out and walking through the park, even though there wasn’t a house in sight. I guess at the weekend some of them were out to walk in the park, but some of them would have lived nearby and used it regularly to get to and from the city. There were also the tunnels that went through the mountain to Caerphilly/Caerfilli (with its wonderful castle), and very occasionally you’d hear this rumble before a train appeared from nowhere. I remember the footbridge that you could walk across to get to the other platform, high above the tracks, and the long, bramble bounded paths that ran down to the quiet platforms. There were white picket fences and gates, green tinged with moss, and a feeling of better times that had passed. I guess this is one of the things that stirred my (still passionate) interest in history.

Now all this has come flooding back through stumbling onto a tribute page by Mike Slocombe about Cefn Onn Halt with some lovely photos of the station at various times, including the two I’ll link to below; one showing it in its hayday and another as I remember it as a child. Mike also has a wonderful 360º panorama shot of the station (Java required), including the footbridge as I remember it, before the walkway was removed. 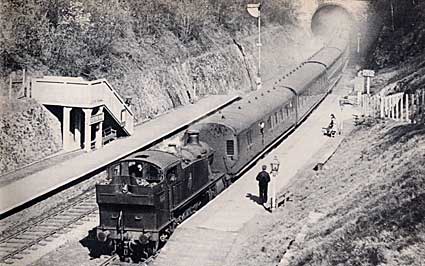 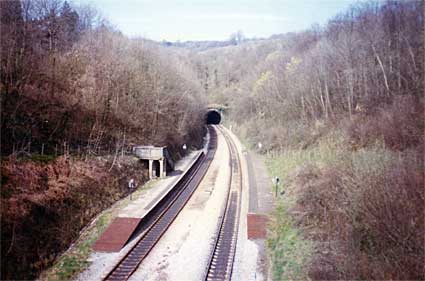 The NASDAQ has added The SCO Group to its "List
of Non-Compliant Companies" as a delinquent filer, with the entry:

You've got to admit that there's something nicely satisfactory to a company that makes such crazy claims reaping its whirlwind.

Found this really useful information on what to look for before a drive fails when you’re using the SMART monitoring tools under Linux.

The summary: If you start seeing ECC errors being reported – make sure you’ve got good backups! Do this even if the drive seems OK.

The news sites are now reporting a mag 6.4 earthquake in Central Iran has killed over 400 and injured thousands of others. This comes less than 2 months after the deadly Asian tsunami which in turn was exactly one year on from another massive earthquake, again in Iran, at Bam which killed over 30,000.

The strange thing for me this time is that I’d seen an email report (read on for it, or follow this link to a web version) of the quake 5 hours before I wrote this, and I’ve been keeping an eye on the news to see what the impact was going to be..
END_OF_DOCUMENT_TOKEN_TO_BE_REPLACED

Grr, well it appears that spammers were leaving spam comments on here as anonymous users so I’ve now disabled that ability for non-registered users. Apologies to everyone, you must now register to leave comments. Blame those scummy spammers for this. 🙁

This highlights the only thing I’m missing from PostNuke, and that’s the ability to have a box that shows the latest comments, the only reason I spotted these was trawling through the MySQL database backend on a whim to see what (if any) comments had been left recently.

Saturday 19th February is the anniversary of the bombing of Darwin during WWII by aircraft launched from Japanese carriers, 10 weeks after Pearl Harbour.

The ABC has a news report on the commemoration.

It appears that Microsoft is up to its old tricks again, this time checking for Wine, the open source implementation of the Win32 API, and failing under certain conditions.

It’s not even like they pretend that this is a check for pirate software, they specifically look for the registry key:

which only Wine has, it doesn’t exist in MS Windows at all!

Given SCO’s potential de-listing from the NASDAQ because of failing to file a 10-K annual report on time (or indeed, within the 14 day delay period they requested) someone at Groklaw has done this wonderful skit based on the Monty Python Dead Parrot sketch.

It appears that a project launched in 1999 to try and clone the Thylacine, more popularly known as the Tasmanian Tiger, has been shelved due to the poor quality of the available DNA. 🙁