The first edition of William R. Cheswick and Steven M. Bellovin’s excellent “Firewalls and Internet Security: Repelling the Wily Hacker” is now available online! According to Google Scholar this book has been cited 661 times..

The second edition is available from Amazon.

Thanks for the pointer, Rick!

Oh dear, it appears Groklaw has some serious (hardware) problems..

Sorry, there are hardware problems with the database server, the RAID card is fried. Prognosis is that it will take till tomorrow EST to fix the machine. Groklaw will be down until then.

Must remember to update my offline backup of my home machine tonight..

Update: Groklaw is now back online..

The film, An Inconvenient Truth, former US Vice-President Al Gore’s dire warning about the threat of climate change, has won the Oscar for best documentary. Making use of a vast body of scientific data, the film represents a stinging rebuttal to the dwindling and increasingly discredited band of skeptics who refuse to acknowledge the extent of climate change.

SBS World News just announced a news flash that Iran claims to have launched a space rocket. They said no other details were available.

See Update 4 – they didn’t it turns out..
END_OF_DOCUMENT_TOKEN_TO_BE_REPLACED

Here’s a fun stop motion animation on YouTube with real people done by a couple of guys that took 2 months to film and edit.

3. Nothing is fake and no green screens were used. The only computer animated part was the letters falling on the page.

Myself and Jeremy have just received the following SMS from the Connex Melbourne SMS Service (run by Platypus World). It looks like they’ve been hacked.. 🙁

ALLAHU AKBR FROM CONNEX! our inspectorS Love Killing people – If you see one coming, run. Want to bomb a train? they will gladly help! See youin hell!

Not a good SMS message to get from your train company in the current climate..

Update 1: A Muslim friend of mine tells me that the message doesn’t make sense, Allah hu Akbar (God is great) is not the sort of thing that people say to each other.

Update 2: Looks like quite a few others got it too..

Update 3: I wonder if they also got hold of the phone records, or whether all they figured out was just how to feed a random message into their SMS everyone workflow..

A hoax message was sent tonight to some users. Connex apologises and is investigating with the police.

There is a news story on the ABC this morning saying:

Around 10,000 people who have signed up to a timetable update system received a threatening message last night, after hackers broke into the system. […] Connex spokesman Andrew Cassidy has apologised for the incident and has reassured subscribers that their personal information is safe.

They are trying to reassure people that their details are safe:

“As far as we can see, the individual was able to get in, type this message and get it sent [and] had no other access to information stored in that database.”

The question is, then, how did the attacker get in ? Well, it seems like it was that age old problem..

Connex says passwords to the system have been changed to prevent further incidents.

My guess is it’s either people picking easy to guess passwords or (increasingly likely these days) a Windows system getting attacked by a virus or trojan and having a keylogger installed.

Update 5: It appears that the company that runs the SMS service for Connex are running their public facing systems on Windows, so it’s probably not that surprising that this hack happened. 🙁

Strangely enough this hack hasn’t made it onto their making news page.

Update 6: Just found an alternative rendering of the quote from the Connex spokesman:

“All they were able to do was to hack in and act as though they were a staff member doing a remote access to send a message to subscribes.”

It would appear that Vista’s DRM protection is for more than just “premium content” – even DRM protected “CD’s” apparently won’t play through S/PDIF (optical) outputs whereas they work just fine under Linux.

My test system’s high-end audio outputs are S/PDIF (Sony/Philips Digital Interface Format) compliant. S/PDIF is probably the most common high-end audio port around for PCs today. It also has no built-in DRM (digital rights management) capability, and that turned out to be an important matter. […] When I switched back to Vista, I tried to play Wilco’s Yankee Hotel Foxtrot CD. Whoops! Not a single sound emerged from my speakers. After a little investigation, I found that Vista disables media outputs that don’t incorporate DRM, when you try to play DRM protected media through them.

Quite sad really given that Vista couldn’t handle his on board RealTek ALC 882 audio chipset either!

That was a kick in the head. I have a fully legal CD in my hand. Any other version of Windows will play it, Linux will play it, Mac OS will play it, and my CD player will play it, but if you’re using S/PDIF for your computer-driven audio and Vista, you’re out of luck. If you have a card with a Toslink optical digital audio port, you will be able to play it.

The BBC is reporting that a Colossal Squid (Mesonychoteuthis Hamiltoni) has been caught by a New Zealand trawler in Antarctic waters: 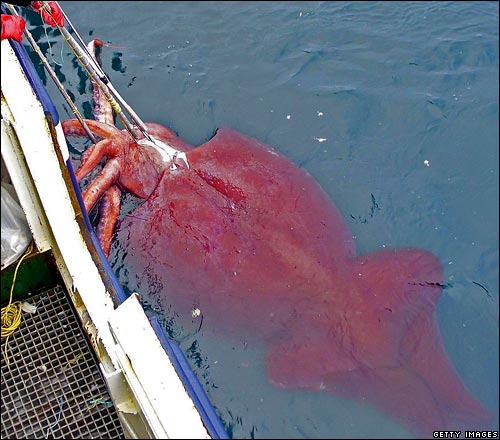 The BBC is reporting that Abdel Kareem Nabil has been sentenced to 4 years in jail:

He had used his weblog to criticise the country’s top Islamic institution, the al-Azhar university and President Hosni Mubarak, whom he called a dictator. […] During the five-minute court session the judge said Nabil was guilty and would serve three years for insulting Islam and inciting sedition, and one year for insulting Mr Mubarak.

Just been playing with SmartMonTools under Linux to monitor the attributes of my SATA drives (something I’d not bothered to do since upgrading from my old Adaptec SCSI RAID system) and found that it was alerting me about:

A lot of digging around found nothing (except other people wondering what it was), until I stumbled upon a page about the Seagate Barracuda 7200.9 ST3300622AS at Cropel S.M.A.R.T. hard drive monitoring which says:

Now given that I’m unwilling to believe that the air temperature of my drive is really 74 billion Celsius (three orders of magnitude hotter than the corona of the Sun) there’s got to be something else going on here..

So – does anyone out there have any good ideas ?