I have uploaded my photos from Thursday (Day 4) of Linux.Conf.Au 2008 at Melbourne University. They are exclusively of the RepRap that was being shown off today and a gathering of people experimenting with the wireless mesh and collaborative capabilities of the OLPC XO’s that were distributed yesterday. I’ve already heard of at least 2 bugs being found through this release of machines to developers (one by Jason White).

I’ve just rearranged & geocoded all my LCA 2008 photos on Flickr into a set per day, gathered together into a single collection, which makes life easier for people who just want to see what happened on what day! I’ve updated the links on previous blog entries to point to the right set for the day in question too.

I’ve now uploaded more photos onto Flickr from the speakers dinner on Tuesday night held at St Pauls Chapter House (near the cathedral), built in 1891, a lovely building! I don’t have any photos from the day on Tuesday as I had to work.

There are also photos from Day 3 (Wednesday) where at morning coffee there were LWN cakes to celebrate LWN’s 10th birthday and we were distributing OLPC XO laptops to various chosen delegates for them to go develop amazing things with (or give them to someone else who would). It was a great buzz to make peoples day like this, especially when they tell you what they could do with them!

This was something of a shock on LWN tonight.. 🙂

I’ll have some more of my photos (including more OLPC shots) once they’re uploaded to Flickr.

Nokia and TrollTech (the people who write QT, the widget library that KDE uses, and who are a supporting sponsor of LCA 2008) are working out a purchase agreement (PDF joint letter).

Given that Nokia don’t seem to have a clue about open standards (Theora “proprietary” indeed) this doesn’t sound like a particularly promising deal to me. 🙁

Well today was Day 0 of LCA2008 and I was there as a volunteer helping out with lugging things, putting banners up, folding shirts and working on the registration (( rego, in Australian )) desk.

I’ve also started uploading my photos from this to Flickr and it looks like I’m the first to do that (or at least tag them as such). 🙂 Day 1 registration opens at 8am and I’m going to do my best to be there early (Connex permitting)! 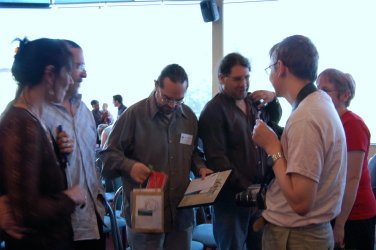 So Melbourne is investigating an electronic tag based ticketing system for public transport called Myki (presumably meant to be pronounced My Key and not mickey), and in an interesting coincidence Bruce Schneier reports a successful attack against a Dutch ticketing system that’s about to be deployed:

The first reported attack was designed by two students at the University of Amsterdam, Pieter Siekerman and Maurits van der Schee. They analyzed the single-use ticket and showed its vulnerabilities in a report. They also showed how a used single-use card could be given eternal life by resetting it to its original “unused” state.

The second attack is a reverse engineering of the crypto algorithm through a physical attack on the circuitry which will be a jumping off point for further attacks, I guess.

I wonder how long it’ll take for the Melbourne system to be similarly compromised ?

Someone had a sense of humour..

Bookmarking this useful information from Russell for future reference. I’ve just installed the RSS Footer plugin as recommended by the post that Russell links to.