Well another battle in the long war with SCO is over, a US court jury trial has confirmed that Novell do indeed own the UNIX copyrights and SCO do not. Of course SCO could appeal, but this would be the second time they’ve lost on this point.

I’ve not been following SCO’s stock price recently, it’s been pretty bad since the heady days of around $4 per share, but a Groklaw newspick from their RSS feed just piqued my attention by pointing at the Yahoo chart for SCOXQ.PK (delisted from NASDAQ, trading on minor markets) which shows SCO trading at barely over 5c a share. 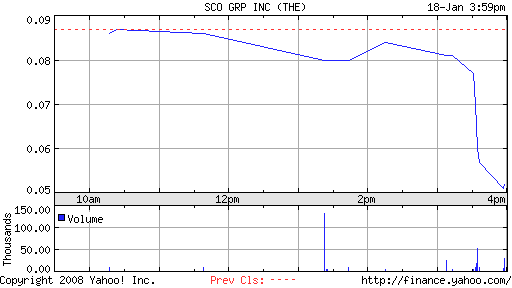 Here’s the title of the press release: “The SCO Group Files Chapter 11 to Protect Assets as It Addresses Potential Financial and Legal Challenges”, which you can find here. They say reorganization “ensures business as usual.”

It may also act as a useful extra delaying tactic in the determination of how much they owe Novell in their trial..

Some of SCO’s remaining claims were yet to be decided at trial, which was to begin Sept. 17. The trial will be stayed under bankruptcy law, according to Novell public relations director Bruce Lowry. “We’ll be looking at our options,” he said.

After the victory by Novell SCO’s inflated stock price has dropped by $1.12 to 44c US.

Back in 2004 Sun’s then CEO, Scott McNealy, stated in an interview with Jem Matzan (NewsForge reprint) about CDDL’ing OpenSolaris:

We had to pay SCO more money so we could open the code — I couldn’t say anything about that at the time, but now I can tell you that we paid them that license fee to expand our rights to the code

However, now that Judge Kimball has ruled that Novell actually owns the copyrights and not SCO I presume it’s now up to Novell to decide whether or not that deal is still valid, probably at least partly dependant on whether or not SCO can find the cash to pony up the dues on it they illegally withheld from Novell.

Could be interesting given Novell’s stake in Linux.

Groklaw has the details, but Judge Kimball has ruled in SCO versus Novell that:

[T]he court concludes that Novell is the owner of the UNIX and UnixWare Copyrights.

Additionally he has ruled that:

There is now a text version of the judgement.

If you thought SCO couldn’t stoop any lower, think again. They have filed a motion in SCO versus IBM saying they wish to depose PJ, the creator of Groklaw.

I can say this: SCO in its wisdom has just guaranteed that the judges in SCO v. IBM and SCO v. Novell will have to read Groklaw. So, welcome Judge Kimball. Welcome, Judge Wells. We’ve enjoyed very much learning about the law by watching you at work. SCO told you something that isn’t true. No one tried to serve me that I knew about. No one informed me of any deposition date. That is true. It doesn’t feel so nice to be smeared like this, I can tell you that, and to have to pay a lawyer to deal with this harassment. I view it as such, as a kind of SLAPP suit, a vendetta to pay me back for blowing the whistle, and to shut Groklaw up. SCO wants to put a pin on a map and point to it and say, “Here’s PJ.” Then someone drops by and shoots me, I suppose. I certainly have nothing to tell them that is relevant to this litigation.

Basically SCO have gotten so fed up with PJ and the various other Groklaw contributors poking huge holes in the farcical SCO law suit that they have convinced themselves that the site is a front for IBM and that PJ doesn’t exist and now want to prove it. Sadly for them their fear-induced paranoia can’t change fact into fiction and so, as usual, they’ll loose eventually but they want to make life as painful as possible for anyone who dares to laugh at the emperors new clothes.

I do hope that this motion doesn’t succeed, but I feel that SCO will find it rather painful for their reality if it does.

Well we know SCO’s stock has been performing sub-optimally (mirroring the company itself, suing your own customers like Autozone & Daimler is not a smart move to get repeat business) but now Groklaw raises the spectre of SCO going under before they can get to trial with IBM!

For instance, SCO’s latest 10Q filed with the SEC says they they:

believe that we have sufficient liquidity resources to fund our operations through October 31, 2007.

Now that may not be a problem for a company making money (they won’t touch their resources), but SCO isn’t. PJ goes on to say:

So do they actually have enough funds to make it to trial? After all, the Novell litigation goes first and is currently set to begin on September 17, 2007. There is currently no date set for the IBM litigation to even go to trial, but we do know it is expected to last for about 5 weeks. If Novell starts on September 17 and runs for even half that long, oops. Insufficient liquidity resources, I’m thinking, to make it to trial with IBM after that. No wonder SCO asked the court to have IBM go first. That’s if either case ever does go to trial. SCO again admits neither may ever make it to a jury.

Strangely enough this is not good news. Even though SCO’s “mountain of evidence” turned out to be a measly 326 lines of “code” (IBM identify 121 as #define, 12 as function prototypes, 164 as structure definitions and a quantity of comments) in 12 files, 11 of which are header files, it would be very useful to get this all out in open court to finally prove how brazen a shakedown attempt this was.

SCO have had enough to worry about recently, but just to add to their troubles their stock is now trading at less than the $1 minimum bid price that the NASDAQ regulations require ($0.94 as I write).

If that happens for 30 consecutive days then they are deemed to be non-compliant and the NASDAQ can begin moves to delist them, unless they manage to trade at more than $1 for another 10 consecutive days.

The thlot pickens! Groklaw has “IBM’s Memo in Support of its Motion for SJ on SCO’s Interference Claims” (SJ is summary judgement I believe) and has the interesting quote from Lawrence Goldfarb, a BayStar Capital’s managing partner, about what happened when BayStar invested in SCO after Microsoft introduced them:

“Microsoft stopped returning my phone calls and emails, and to the best of my knowledge, Mr. Emerson was fired from Microsoft.”