Congratulations to the NFSv4 team who have seen their code pass the fsstress NFS stress testing and is reported to be stable. This was announced on the NFSv4 list yesterday.

Caveat: This is only the core functionality of NFS, and it’s not (yet) in the mainline kernel!

There is more on the Linux NFSv4 testing effort over at OSDL.

You’ve heard about the film “The Terminal” where Tom Hanks character gets stranded in an airport terminal because he suddenly finds himself stateless. Well there is a real life version of this that has been going on for almost 7 years now in Australia and, unfortunately for the person, he’s not trapped in an airport lounge but in various Government detention centres with razor wire and guards.

Peter Qasim is caught in a situation where he arrived as an asylum seeker from Kashmir, was denied asylum by Australia, but India refuses to believe he is their citizen and will not accept him. He is trapped inside the system, unable to return to Kashmir and not permitted to leave the detention centers.

He has been locked up for almost 7 years now, and faces no escape and (in his dark times) believes he will die there, never being allowed to live the life of a free man. The ABC has a background report on his plight and there is more here, here and here.

In other news, Australian officials deported a man travelling on a false French passport despite being told he was a convicted criminal by the French authorities.

The French Embassy believed without his French passport the man with the fake identity could not leave the country, but they had not reckoned on what the Australian authorities might do.

Sources close to the French Embassy say they are most concerned that their warnings about the man posing as Kingue were seemingly ignored and a convicted criminal using a stolen identity and therefore a fake passport was able to travel out of this country with the help of the Australian Government.

Argh – I don’t believe how silly US patents are getting these days! Found through this Groklaw story.

The Public Patent Foundation has a statement condemning the issuing of a patent diagnosing B12 deficiency by looking for elevated homocysteine levels, a medical fact, and asking for it to be revoked.

“This result is not only perverse public policy – placing the rights of patent holders above the rights of doctors to perform medical diagnosis and discuss a natural biological relationship – but it also violates patent law, which mandates that only processes, machines, manufactures, and compositions of matter are eligible for patent protection,” states PUBPAT’s position statement titled, Supreme Court Should Protect Medical Facts and the Right of Doctors to Use and Discuss Them From Patents. “The public, including specifically those wishing to use and learn from laws of biology, is significantly harmed by a failure to maintain the limits on patent eligibility because patents can – and often do – prevent important medical treatment and scientific research.”

A quick look at my email shows that the USGS Earthquake has reported 5 sizeable aftershocks around Indonesia, 3 in Simeulue and 2 in Nias (where up to 2,000 are reported to have died).

This ABC report is predicting a Tsunami and evacuation orders have been issued for various parts of that region. They are also reporting dozens dead on Nias.

This appears to be the predicted aftershocks and follow on quakes from the new stresses put on the plates in that region after the massive December 26th earthquake.

Interesting times at the moment!

Donna has some good news about the film rights for her best-selling autobiography Nobody Nowhere.

I encountered a wonderful, funny, fountain named Beverly Nero, and our email conversation turned to film writes and the fact that Nobody Nowhere was once again up for option. Bev picked up the option, and supported my belief I might actually be able to write this. Just as Nobody Nowhere was written in 4 weeks, so was my first draft of the screenplay. The book went on to become an international best seller.

The film is now in development, with a target date of May 2006 to begin filming. The movie will be filmed in the UK, throughout England and Wales, over to greater Europe and tell the Australian side of the story from Donna’s perspective.

Believe me, those 4 weeks were hectic and she’s done the first edit on the script too now!

The thing that gets the highest hit count on this website is not any of the blog entries, none of the photo galleries nor even the URLs that those damn accursed referrer spammers try to go to, but this photo: 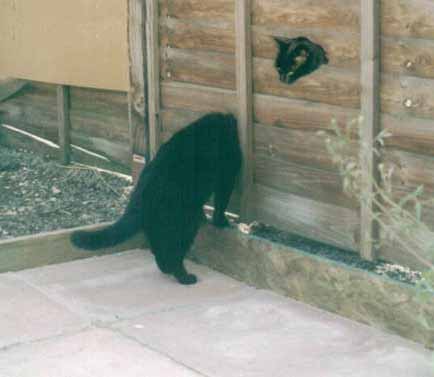 Unfortunately I can’t find any attribution for it – the best I’ve got is that it was first mentioned in this story by Alec who pointed to this URL that went 404. I managed to track down a copy via some method that escapes me and added that as a comment to Alec’s article, which he then posted about here.

The EXIF information isn’t much use, it just says:

My guess is that as Photoshop is involved it’s a fake.. But I’d love to find out who did it so they can get proper credit!

Here’s an interesting turn up for the books. SCO, who started the lawsuit and who’s lawyers created their side of the documents, apparently have been been ripping off the scans of legal documents from the cases done by Tuxrocks and Groklaw and putting them up on their new “IP” website, without any credit to the original source.

Frank Sorenson is quoted on Groklaw as writing:

Another example is the Declaration of Ira Kistenberg (compare with the copy I obtained, scanned, and posted). In the upper right-hand corner of the page, you can see my handwriting where I noted which particular document this one was (236-G) so that I could remember when I got home from making copies at the courthouse.

ABC News is reporting that the new Tasmanian Tiger photos (as yet unpublished anywhere) which created such a stir recently are now believed to be fakes by the curator of the Tasmanian Museum & Art Gallery.

Mr Pemberton says he thinks the photos are clearly doctored.

“The thylacine in the image was very similar to another photograph that we quickly identified,” he said.

“But secondly there were two photographs and there was a time gap between the two of… five, 10, 20 seconds… and the posture of the animal hadn’t changed, which I found very strange.”

Hoorah! I’ve just replaced the standard Postnuke RSS 0.91 RSS backend.php with the xBackends 2.6 from LEXeBus to give me an RSS 2.0 feed instead of the older 0.91 version.

The two minor hacks I did was to mimic the behaviour of the old backend.php so I could just drop it in as a replacement by setting the following variables at the top of the script:

With that done I get a successful validation via FeedValidator, viz: