Groklaw is reporting a potential strong win for open standards over proprietary document formats, Massachusetts has decided to back OpenDoc XML as the state-wide standard that their office applications must support in their latest draft!

If this is put into practice this is likely to be a very significant move as there will be a considerable knock-on effect for those who deal with the state government there.

They’re asking for comments and I ask folks who support this move to write with the reasons why they feel this is a good move.

Bah, SpamAssassin here is picking up lots of attempted viruses being sent to me, which isn’t that strange, except that ClamAV doesn’t spot them. Turns out the reason it’s not spotting them is that when you look at the email it looks like it’s forgetting to attach the virus payload, so it’s actually a completely safe (though annoying) email. D’oh!

The messages have an attachment that’s labelled application/x-compressed & base64 and given the name of a zip file, but then instead of the expected payload it has the text %TS_ZIP_ATTACH%. I’m not the only one though, there’s plenty of archived messages to lists with the same..

Of course, this begs the question of how it’s spreading in the first place.

Rich Boakes writes about spammers creating Yahoo Groups to post their messages in and then using referral spam to entice people to read them, but today I received a spam in email with another new twist on redirection.

It looks like to get around the (highly effective) URL blacklists that contain the URLs of spam sites that the spammers send to you they are now using legitimate sites badly written redirect scripts to bounce you onto their rubbish. They are taking advantage of buggy scripts that allow you to specify the URL to redirect you to, rather than tieing you into a list of allowed sites.

Because tools like SpamAssassin look at the URL rather than the arguments to the script (delineated by the ? in the URL) it is currently not matching those against the black lists.

I guess in a little bit we’ll see an upgrade to SpamAssassin to add checks to the arguments in the URL to make sure they’re not spam sites, and I guess a possible blacklist of broken redirect script URLs!

The current edition of the Australian APC Magazine has a really interesting article on Hijacking the GPU (Graphics Processing Unit) to use it for general purpose programming. Their take is that the latest graphics cards give you an awsome amount of processing power which you can now take advantage of if you can frame your problem in a manner which is acceptable to the way a graphics card works. It’s possible, but it takes work.

From my point of view this is really interesting because of the fact that now you can get more power (theoretically) than some supercomputers from a few years ago had in a *current* top end PC for a few thousand dollars if you can make use of it. As a quick point of reference, from 2000 to 2004 VPAC had a Compaq AlphaServer SC Cluster that took up 9 19″ racks and was in the June 2001 Top 500 List at number 151 with a peak rating of 213 gigaflops.

Now the article says that one of the new nVidia 7800XT cards can do 165 gigaflops (peak presumably) and current generation motherboards can support two of these (they’re x16 PCI-Express cards, not AGP). That gives you (theoretically) 330 gigaflops, excluding whatever processor is on the motherboard!

It would be fab to see an MPI implementation that could take advantage of this. 🙂

Read on for some quotes from the original article followed by a link to a site that is all about general purpose programming of GPUs for real world tasks.

END_OF_DOCUMENT_TOKEN_TO_BE_REPLACED

Jabber Australia has issued a press release entitled “Google joins Apple as another major Jabber adopter“, welcoming their use of the open protocol and raising the concern about whether or not Google will interoperate with other Jabber servers.

Now that Google Talk is live and is a Jabber service the next question is – how do I connect to it using the KDE Instant Messaging client Kopete ?

It’s dead easy – it’s just another Jabber server with the only restriction that you *must* connect to it via SSL.

So, what you need to do is:

At that point you should be ready to hit Next to create the Google Talk Jabber account in Kopete! 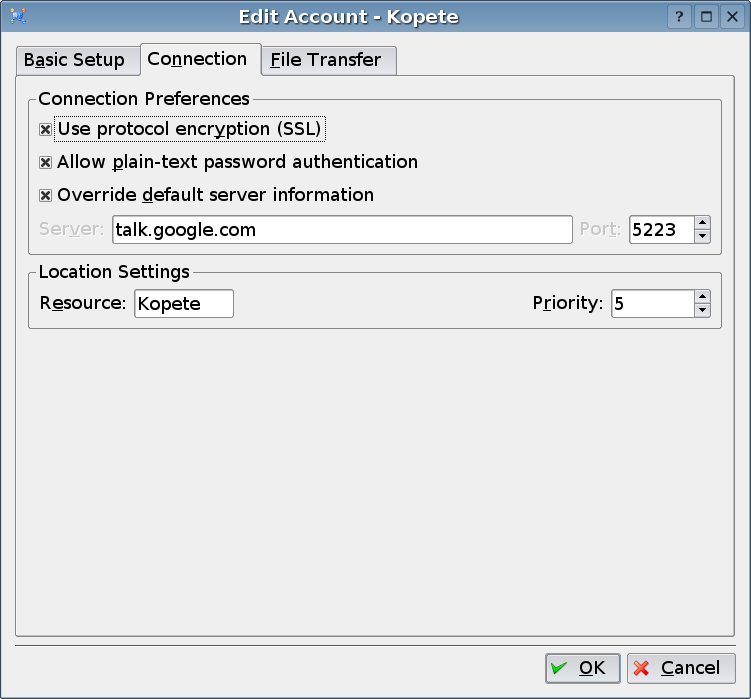 So Google has adopted Jabber/XMPP as the core of their new Google Talk service. They provide a dedicated Windoze client, but they make a point of showing that any Jabber/XMPP client can connect to their service, a nice contrast to the other IM services that change their closed protocols that result in breaking free software clients.

Google Talk does not archive the contents of your text or voice communications on Google’s servers, and we will not archive such contents on our servers without your express permission and clear notification to all our users.

The only wrinkle I’ve found so far is that Google Talk doesn’t interoperate with other Jabber servers at the moment (from what I can see). Which kind of misses the point 🙁

Here’s an interesting story from ABC news about a New Zealand Uni who have tagged a crocodile with a satellite transponder and are tracking him online.

The website now works with non-Internet Explorer browsers, kudos to the maintainer (who isn’t an IT person) for fixing it so rapidly after I dropped them a quick email alerting them to the issues.

Well we’re back from our trip up to lovely Queensland, where the weather really was beautiful one day, perfect the next! Donna was doing a day of talks on the Sunday for the Gladstone Area Autism/Asperger Support Group as part of a two day conference, with the Saturday being done by our friend Wendy Lawson. We all stayed at the wonderful Earth & Sea B&B and special thanks to Anlyn and Marshall for looking after us so well there!

We then had a few days to ourselves and we’d booked a cabin at Capricorn Caves which was wonderful, no mobile coverage, brush turkeys everywhere & a small mob of ‘roos. We took the opportunity to pootle around the Capricorn Coast area including Yeppoon, where we were treated to the initially puzzling fact of seeing snails in rockpools with legs, ’till we twigged that there were thousands of tiny hermit crabs there, and spotted a mass of roosting flying foxes in the mangroves around the river just outside the town.

We also managed to loose our rental car keys on the beach, but thankfully some kind soul found them and handed in at the police station, so as we were desperately trying to find a number for the company we got a call from them asking us if we’d lost our keys.. 🙂

Leaving the caves for the trip back to Gladstone we had to stop to avoid hitting a bird sauntering across the road that looked like a cross between a pheasant and a raptor, but turned out to be a Pheasant Coucal, a very large member of the cuckoo family (not a pheasant!) that is the only member to raise its own young. A wonderful view!

Anyway, we’re now back in Melbourne, in the rain, and actually enjoying it. You soon realise that if the weather’s good all the time then there’s no contrast to make it stand out.

ABC News is reporting that “Three new research papers debunk earlier research that showed the planet was not warming up“.

This includes the data from the NOAH-11 satellite that at first seemed to show that the troposphere was not warming as predicted. But now researchers have found:

“As it turns out one particular satellite, know as Noah 11, a number of years back was spliced slightly incorrectly. There was mistake made in the correction for the time it actually travelled overhead and that’s just recently come to light.

“The correction’s been made and now we find the satellite data shows a much more rapid warming and a warming which is very consistent with what we see at the surface.”

This comes at the same time that the 11,000 year old Siberian permafrost is thawing out.