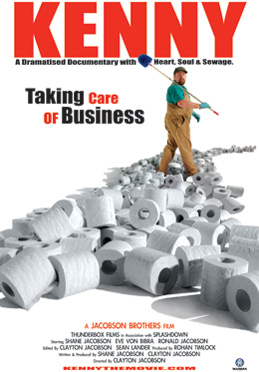 Today Donna and I went to the first audience screening for a new Australian film called Kenny. It’s a fake documentary following the life and work of a portaloo person, Kenny, who works for a Melbourne company called Splashdown as he copes with customers, family, the public and, of course, sewage.

Kenny is much more than just a very funny film, it’s a film with a good heart and a sharp eye on the human condition – especially where it concerns those “invisible” folks doing the dirty work that keeps society going. The filming is great and it makes quite a convincing documentary, the character of Kenny is strong, humble, funny and very warm hearted.

The authenticity is helped by the fact that Splashdown is a real Melbourne company (doing “Corporate Bathroom Rentals” – the owner Glenn Preusker is the sole investor in the film) who lent them the equipment, yard and vehicles. You could say that’s the ultimate in product placement, and sure, it won’t do their image any harm, but that’s not what the story is, the story is how Kenny copes with lifes ups and downs with good grace and humour – whether that be trying to persuade a new recruit to retrieve a lost wedding ring at a festival, defending their precious thunderboxes from this years annual torching at a race meet or coping with your first flight to the US.

It was my first time at a test screening and what we got to see was not the finished movie, still left to do is doing the sound (we had the audio from the camera used, which was still damn good & added to the authenticity in my book), fixing up the colour matching between scenes and some tidying up. The films creator, producer and director Clayton Jacobson (IMDB entry) was there to introduce the film and lead discussion and questions afterwards, but also there was Kenny himself (believed to be Claytons brother Shane) and a number of others from the cast (ex-wife, son, co-worker) and the camera man.

The audience reaction was brilliant, they loved the film. A couple felt there was a flat bit prior to the trip to the US, but to me (and according to Clayton) that was because Kenny was going through a difficult patch and that life isn’t all roses. It also gave a good contrast to what came after.

Anyway, I think it was an awesome film and well worth going to see when it comes out!It’s being distributed in Australia by Madman Entertainment and is due out around July – keep an eye out for it.Oh, and Clayton, if you read this, any chance of keeping the soundtrack we heard at the test screening as an alternate option on the DVD ? Please ? 🙂