Interesting.. the BBC is reporting that:

The twin brother of Polish President Lech Kaczynski has accepted the governing party’s nomination to be the country’s prime minister.

Here’s the a composite photo from the AP via the BBC putting the Polish PM and President side by side. Or is it the Polish President and PM ? 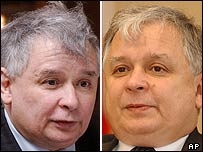 Apparently the new PM turned this opportunity down once before because he felt it wasn’t right, but with the resignation of the previous PM he’s decided that it was better than the alternatives.