Saturday 18th June was the Belgrave Lantern Parade, here’s the best of my shots from that night. Taken with Nikon D90 and Nikkor f/1.8 50mm lens. The computer, known as “K Computer”, is three times faster than a Chinese rival that previously held the top position, said Jack Dongarra, a professor of electrical engineering and computer science at the University of Tennessee at Knoxville who keeps the official rankings of computer performance.
[…]
K is made up of 672 cabinets filled with system boards. Although considered energy-efficient, it still uses enough electricity to power nearly 10,000 homes at a cost of around $10 million annually, Mr. Dongarra said.

The research lab that houses K plans to increase the computer?s size to 800 cabinets. That will raise its speed, which already exceeds that of its five closest competitors combined, Mr. Dongarra said.

But I have a reliable source who claims that this is using GRAPE cards as APUs to reach its performance without causing (another) meltdown in Japan..

The press release for the new Top500 says:

Unlike the Chinese system it displaced from the No. 1 slot and other recent very large system, the K Computer does not use graphics processors or other accelerators.

Some interesting news overnight, the company PathScale have announced their EKOPath4 compiler will be released under open source licenses:

PathScale announced today that the EKOPath 4 Compiler Suite is now available as an open source project and free download for Linux, FreeBSD and Solaris. This release includes documentation and the complete development stack, including compiler, debugger, assembler, runtimes and standard libraries. EKOPath is the product of years of ongoing development, representing one of the industries highest performance Intel 64 and AMD C, C++ and Fortran compilers.

This is the compiler that, when first launched, the company said that if another compiler generated faster code then you should submit a bug report to get it fixed. 🙂

In conversation on the Beowulf list I asked about the licenses and the code and their CTO replied, saying:

Main compiler is GPLv3, v2+ and LGPL – Other parts are a mix of permissive licenses.

and that the code itself was going to be available from the PathScale GitHub account, alongside their existing open source projects.

An unflattering photo of me at one of the low points of my stay in hospital courtesy of my good friend Iain Ralph.. 😉 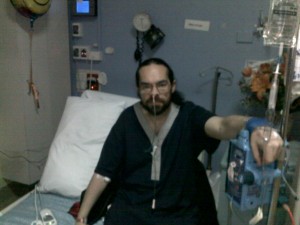