So observers using the Hubble ST are reporting the possible discovery of two new moons of Pluto, for now called P1 and P2. As the ABC news report says:

“It’s … strictly coincidental that Pluto of course was named for the god of the underworld and we’re describing these Halloween moons,” Alan Stern of the South-West Research Institute said.

You can read the full NASA press release, and the comparison composite photos showing the movement within the Pluto system is below. 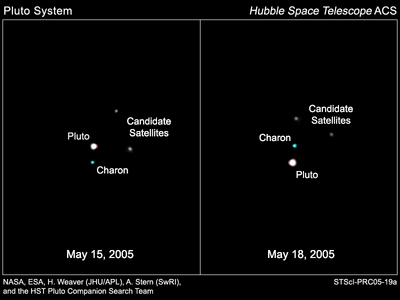